The employer for whom the project was created indicated that he was very interested in an in person interview.  I also indicated that I was very interested, as well.  since that exchange, chirp.  In the interim. I have gotten 3 1st interviews set up with other companies, one of which was today and got “extended” to give it more time  Also I may have started a client engagment with some folks I really like and would like to see prosper.

While the hits wind down (but haven’t stopped, by a long shot) on the GGH project pages, I’m pleased to report that the project and the resulting presentation were sufficient to get the attention of the potential employer, and we’re now moving on to an in-person interview.

I’ll be interested to find out how large the initial pool of applicants was, since the cut to 20 was fairly rapid, and it sounds like most of the rest of the team has been selected.  It was a risk to take the few days required to run the project, but I think it was worth it, since it accomplished the original objective, and taught me some valuable things just by running it.  Time well spent, but certainly the most  overall time I’ve ever put into a pre-interview preparation.

So Facebook added what i think is a good set of metrics tools for FB pages called Insight.

There are a number of menus, chats and graphs – the tutorial gave a good overview of them.

Here’s an example from the GGH page: 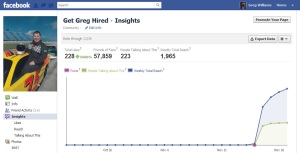 Basic traffic stats,  but hey have other screens that look into demographics, locations, repostings, etc.

A week of great results!

First, thank you to everyone who helped me with this project.

The initial purpose has now been achieved, and the links for this blog, along with those of the FB and G+ sites have been sent to the prospective employer for which this whole thing was created, right at the deadline for submission.

Overall, I logged more than 2,000 impressions on all the sites combined.  Facebook was by far the leader of sites, with over 1,300 impressions.  LinkedIn was primarily used as a referral to the project kickoff post on this site, and traffic on G+ was light.

Active reponses – again, Facebook the big leader with 225 “likes”, 220 “talking abouts”, and 53 “shares”.  It had some extra time, as the G+ and Linkedin activity did not start until later in the week.  There were 316 hits to this site, with 72 0f them coming from LinkedIn, 55 from FB, 18 from G+, and 11 from Twitter, which is really interesting since I did not publish it to Twitter at all.

Based on reading comment threads, it looks like referrals may have gone 3 or more degrees out – about a third of the active responders were people I don’t know at all.

I got responders from all over the world, including England, Qatar, Japan, Ireland, Canada and several cities across the US.

Many people sent encouraging messages and positive feedback, with several wanting to be notified of the eventual outcome.

There was a surge of people viewing my profile on LinkedIn, and I got some interesting contacts because of this project.

People who were initially skeptical, once they realized this was a legitimate effort, became ardent supporters.

Some of the posts generated enough noise that the WP blog got picked up by a couple of aggregation pages, and raised the search profile of the effort enough that I was able to generate a Google searchstories video to include in the presentation.

So, now we wait and see whether the project was impressive enough to get me to the next step in the process.  If nothing else, it was fun to do, and broadcasted my job search in an effective way.  In the first week of December, I’m going to kill off the FB and G+ pages, so that people don’t continue to get messages from them, but this blog will remain as a way for me to record my thoughts as I progress through my search process.

Traffic on the blog site is staying relatively even, due in part to a repost on LinkedIn, which drove quite a bit of traffic.  Facebook hits are way down – from about 200 on the first day to about 20 on day 2.  Lots of secondary effect though – my LI profile got a lot of interest today, and several people contacted me to express interest in the project.  Based on the spike after the LI post, I may repost again in a day or so, to catch folks that missed it the first time.

A social media guru might disabuse me of this notion, but for a campaign with a $0.00 budget and a planned run of only a few days, I feel like this has gotten off to a great jump start.

Facebook was the leader by a long shot on day 1, with over 880 impressions and 199 positive responders creating a 23% response rate.  Taking into account that many of the responders will be from the 233 friends that had this pop up in their feed, I’m very happy to see that there were 55 people who responded that were not existing connections.

Google+ had a significantly lower response rate (in the 50’s), but the Pages feature in Google has only been around for 10 days, and many people have not even created Google+ accounts.

LinkedIn did not get a great response – I may not be using it to it’s full potential, since I did not send a ton of direct invitations through it and relied on visibility from group posts.  Lesson learned.

I have a number of friends and family that live overseas – I’ll be very curious to see what happens overnight.

This blog has averaged 15 views/hour since it was created at this point, and has about 20 different referral sites listed.

Day 1 of the project

I know a lot of awesome people – the social media demo is rolling out pretty well. In the first 8 hours alone, I’m seeing significant reposts, and many folks are willing to connect in dual media. My goal is to show 500 affiliations or more, which in a few days would be a significant acheivement for what is basically a personal favor. People Rock.

Facebook likes are approaching 150, the other sites lag far behind.

I’m very curious to see what happens overnight, and over the next day or two.  Will the bulk of the responses be on day 1, and then fall off sharply?  Or will this actually begin to spread out and get shared?  The test is slightly different than a corporate campaign, in that I’m not actually able to offer an incentive for people to participate, nor am I asking to retain any information about them.  In some ways, those two factors offset, I think.

Help me earn a job with a single click!

A very cool company has asked me to creatively show what I can bring to the table.

My delivery deadline is only a few days away.

Part of my presentation is this project, to demonstrate how I can help this company utilize social media to deliver its message.

I created this blog, a Facebook Page, a Google+ page, and will drive traffic through LinkedIn.

By reading this, you have already helped.  If you have 30 more seconds:

That’s it.  It’s that simple.  The sole purpose of this is to use the results for the presentation, and then after the hiring decision is made (one way or the other) I’ll be taking the pages down, probably in early December.  The blog will remain, since it has no links back to the identity of visitors, and may be utilized differently in the future.

If you’re willing to assist – thank you, I really appreciate it.  If you’re not, then thanks for taking the time to read the request.  Please forgive me if you see this more than once over the next few days.